Project 5 Upgrading reports based on html-acct-table.scm

This is a moderate-sized project. HTML-ACCT-TABLE.SCM is a utility object, designed to create a spreadsheet of numbers, with horizontal axis columns, and vertical axis accounts. It is usually constructed piecemeal from various reports as follows:

In other words, html-acct-table is constructed from a basic table, and the data is added piecemeal to create a full spreadsheet.

My proposal is to eliminate html-acct-table completely, and create a single *add-multicolumn-acct-table* which accepts a minimum of parameters:

and optional parameters, some of which are:

I think this makes the function much simpler to create the following table from a single add-multicolumn-acct-table:

The accountlist is cycled on the vertical column, and each cell is rendered according to get-cell-monetary-fn which takes 2 argument - the row account, and the column col-data. Nested totals are generated and rendered according to 2 different strategies. Each cell may also be rendered as an HTML link to another report, or a register. Each cell may also include another monetary by specifying get-cell-orig-monetary-fn, thereby rendering 'original currency' amounts.

I believe this function will be versatile enough to replace many other reports, and a lot of incomprehensible code can be eliminated.

Majority of charts upgrade from jqplot (on life support) to chartJS (actively maintained) is complete in https://github.com/Gnucash/gnucash/pull/316 (without tests).

have been merged into a common html-chart.scm.

This combined file will create an html-chart object and accept options, and will generate the required javascript code to call ChartJS and create a chart. As a bonus, URL jumps from charts to reports and registers have been resurrected.

have also been upgraded to call the combined charts API, selecting the appropriate bar/line/pie/scatter chart via html-chart-set-type! API call. No saved-reports compatibility issues are anticipated.

I will document some thoughts about development of implementation/mock testing for transaction.scm. Without a framework, creating test-transaction.scm is an awkward hierarchy of function calls as follows:

I have tried yawaramin's ggspec and guile-2.0's SRFI-64 and I think the latter is a much simpler tool. I've created test-transaction.scm based on it, and is still in progress.

The result of all this hard work is a coverage log.

And the coverage log is converted to an html report. Example report output. Excerpt as follows. 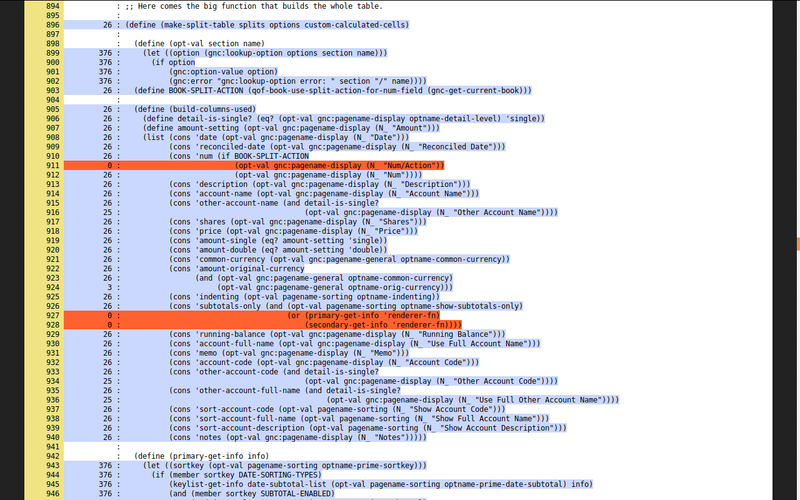 When I was offered opportunity to completely overhaul, I have sought to fix Transaction Report as much as possible, and add options to derive as much value as possible with the underlying data presentable as a customized TR.

This document will serve as useful summary for users, and also as a roadmap for rewriting the git history.

The original TR was a complete mess, grown and hacked together by years of accumulated crud. Many functions were created for single use, numerous lists of splits, options, and sortkeys being passed around for no particular reason. I have flattened the TR to a reasonable level; and I haven't quite finalized it yet. There are further flattening/abstracting refinements that can need to take place. e.g. the generic and versatile TR can be massaged to produce a report suitable for reconciliation, just by setting the right options. I can formalise it by creating another report initialized with the above options. I can also rewrite the Income GST Statement to also exist within transaction.scm (or ideally another file) that will just call the options-generator and the renderer with new values. These may require refactoring to allow modification of calculated-cells

4. Unsure how to fix